Port Henry clings to the hillsides that made it rich. A lakeshore bed of iron ore put this town on the map before the American Revolution and provided ore for the fittings on the fleet of ships built by Benedict Arnold to oppose the British in the Battle of Valcour in October 1776. After the wars, a furnace on the lakeshore stimulated the growth of the port. Rich deposits in the mountains to the west fed another furnace that fueled the town’s economy for almost a century and changed the contours of the shoreline. Campers spend their summers on beaches created by the iron industry. Port Henry’s Main Street proudly announces what iron money could buy.

Port Henry commands a stunning view of Lake Champlain, the Green Mountains and the Lake Champlain Bridge, built-in 1929 across the narrows that mark the beginning of the broad lake. Sailboats have plenty of room to tack back and forth in the open bay in any wind. Mountain streams feed a thriving fish population all year round. Two campgrounds, two marinas, and a public boat launch offer access to the water.

The Champlain Monster lives on as Port Henry’s claim to fame. Film crews come from all over the world in the hope of filming the mythical monster. Visit the Champ View murals to review sightings dating back to Samuel de Champlain’s exploratory venture in 1609. 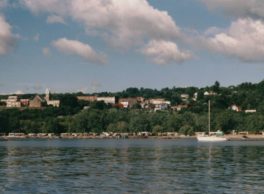